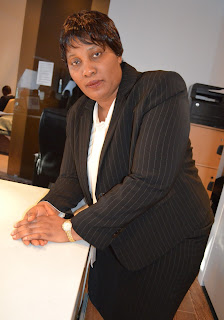 *QUOTES: “Truth never damages a cause that is just”-Mahatma Gandhi
* “Truth without love is brutality and love without truth is hypocrisy”-Warren. W. Weirsbe
* “Integrity is telling myself the truth. And honesty is telling the truth to other people”-Spencer Johnson
* “There may be times when we are powerless to prevent injustice, but there must never be a time when we fail to protest”-Elie Wiesel

“NEVER be afraid to raise your voice for honesty and truth and compassion against injustice and lying and greed.  If people all over the world...would do this, it would change the earth”-William Faulkner

It is true that Professor Alexia Thomas, Chairman, The Commonwealth Liberation Party and Chieftain, Commonwealth Alliance Treaty Commission in United Kingdom has been in the fore-front of fighting against the act of slavery, injustice and dehumanization of United Kingdom Border Agency, UKBA against Commonwealth citizens.

Obviously, the consistent and various justifiable steps undertaken by Professor Thomas, famously known in most homes  in almost two decades as 'Her Knowledgeable' had not gone down well with some people at United Kingdom Border Agency (UKBA)

'Royal Mother,' as this British fiery human right is called observed that she was been stalked daily, followed and closely monitored. She kept receiving anonymous-blocked phone lines. Matters came to the worse, when she knew a third party had bunged her phones.

In a letter by this advocate of freedom to Commissioner of Police, Metropolitan Police, New Scotland Yard dated 24th July 2008, under a subject titled: 'UKBA Personnel Plot, Decoy to Assassinate me and Eliminate my Family' reads “My life is threatened daily by some personnel of UKBA especially from Oakington and Collinbrook detention centers, because I fight against the injustice orchestrated  on Commonwealth citizens. As an activist, an advocate, it is my will to fight for social justice and liberty for Commonwealth citizens and the Black Race. The oppression of Commonwealth citizens and Black Race in detention centers like Oakington, Collinbrook and many more should never be undermined because the truth of the saint cannot protrude against the saint.

In Professor Thomas words: “I have heard enormous support from the government, the Prime Minister, Prince of Wales and Her Majesty the Queen. This is because the Government has proven justice to the vulnerable is freedom, an act to willful their redemption, this can never be denied.

She listed the clandestine monitoring of her activities by stating that: “The personnel of UKBA has persistently tailed me, spy on me and quietly budged my phones. In their decoyed stunt, they make anonymous people call me to set me up by faking the names of different government agencies. I am persistently followed and monitored because I speak the truth and I speak justice to fight against the slavery act of UKBA against Commonwealth citizens in the 21st century.

“Some personnel of UKBA have informed many detainees of their desire to assassinate me. And that I am been monitored daily. If justice for my people is meritable by my quest, then the plot to eliminate the genuine course of my combat must not be covered up. I have persistently questioned the credibility of UKBA. The positive stands of my action are recognized by the UK Government. Detailed below are evidence of the government recognition for every submission I made to the government on my stand in support of the government good governance and my odds opposing oppression of Commonwealth citizens. Rather than the UKBA recognizing my excellent endeavour for standing to eradicate the suffering of my people, my country and my nation; instead they are plotting to kill me because I fight against oppression of the Black Race and Commonwealth citizens.”

In her letter copied to Prince of Wales, Prime Minister, Secretary of State Home Office, Professor Thomas sought for the following protection to show her security alert at 98 percent: “To protect the personal information and that of my family from public register, to register my statement for any assassination attempt  made on my life, my only attacker I envisaged are  personnel of UKBA; to investigate whom amongst the UKBA personnel wants me dead, to issue a restriction warning that anybody who wants an audience with me must officially request an official appointment from me, if the source of the person is known by me; then it is at my discretion to invite the person. Also, to restrict any government agency direct contact at my home, unless in my office premises with my permission. I will stand by my God as my first security and now I request the Metropolitan Police Authority to take my security alert paramount. The act to rub me of my life is an extent to undermine my consistent questioning of the provocative oppression of my people. My actions are just by my reality from their realms.”

Responding in a letter written by Sonia Bonici, Senior Correspondence Officer, Buckingham Palace, it reads: “Further to our telephone conversation 7th July, I write to thank you for your fascimile letter and enclosures which were received in this office this morning. As we discussed, I am forwarding your letter to the Police Department in Buckingham Palace, so that your further approach to The Queen may be known and considerations given to the points you raise.”

On behalf of the Metropolitan Police, Madhu Dodia, representing the Commissioner's Private Office writes under Reference Number 2008070007060 states: “I wish to acknowledge receipt of your fax dated 24 July addressed to the Commissioner, Sir Ian Blair. This correspondence has been forwarded to Commander to Commander Ian Quinton, to arrange for a response to be sent to you as soon as possible regarding the issues raised.”

Till date, this freedom advocate has not relent in her struggle in fighting to securing freedom by legal means for the Black Race and Commonwealth citizens, since “safety is only in the hands of God.”

*QUOTES: “For safety is not a gadget, but a state of the mind”-Eleanor Everet
* “They who can give up essential liberty to obtain a little temporary
safety deserve neither liberty nor safety”-Benjamin Franklin
* “The safety of the people shall be the highest law”-Marcus Tullius Cicero

* “The person who has nothing for which he is willing to fight, nothing is more important than his own personal safety, is a miserable creature and has no chance of being free unless made and kept so by the exertions of better men than himself”-John Stuart Mill

Posted by Swift Reporters at 06:55